In this post, I discuss an important new paper, “Sampling a Stimulated Rock Volume: An Eagle Ford Example,” by Raterman et al., which was presented at URTeC in July. This paper is an instant classic (kind of like Game 5 of the World Series last Sunday!).

Raterman et al. describe coring multiple sidetracks directly through hydraulic fractures created by stimulation of an adjacent well. This type of observation is priceless and very rare. Usually, we can observe fracturing only indirectly from data such as microseismic, and so it is very difficult to validate hypotheses about how fracturing and stimulation occur.

The figure below is reproduced from Chapter 3 of my PhD thesis. It schematically shows different hypotheses used in the literature for ‘stimulation mechanism’. Red lines represent newly formed fractures, and blue lines represent preexisting fractures. I defined these four conceptual models as “pure opening mode” (POM), “pure shear stimulation” (PSS), “primary fracturing with shear stimulation leakoff” (PFSSL), and “mixed-mechanism stimulation” (MMS). POM is the original concept of hydraulic fracturing. Observations in shale pushed investigators to focus on ‘complexity’ and ‘stimulated rock volume.’ As a result, engineers have proposed mechanisms that could create a more distributed zone of fracturing. This has led to the use of the MMS and PFSSL hypotheses. These hypotheses represent two different ideas about how natural fractures could affect stimulation and lead to a more distributed zone of fracturing. PSS is not used in shale; however, it is used to describe stimulation in some geothermal projects in crystalline rock, in which stimulation may primarily occur due to flow in large faults. 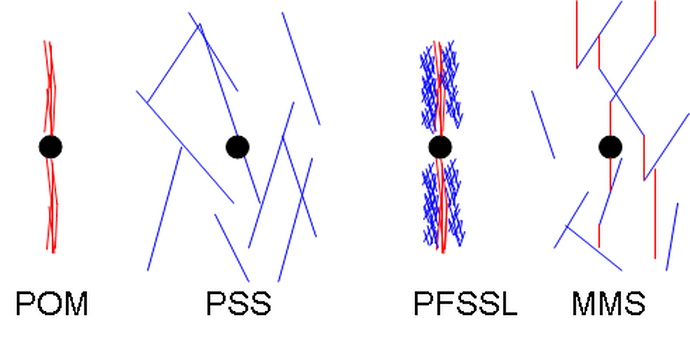 So how to do the observations from Raterman et al. fit in? Raterman et al. observed a high number of closely spaced, nearly parallel, newly formed hydraulic fractures. They saw no indication of flow in fractures/flaws in a variety of orientations (like in MMS) or shear stimulated natural fractures (like in PFSSL). Thus, their observations decisively come down in favor of the POM mechanism.

There is a key aspect of the observations that deserves emphasis: the number of hydraulic fractures intersected is much greater than the number of perforation clusters. This has been observed in other core-across studies, as reviewed by Mahrer (1999), so does not appear to be a fluky one-off observation. This observation suggests a problem with the conventional POM modeling approach. Typically, fracturing from a single perforation cluster would be modeled as creating a single crack. Now, it seems that a ‘complex’ fracture network may actually be a wide region of subparallel hydraulic fractures, with multiple forming from each perf cluster.

It should be emphasized that stimulation mechanism depends on a variety of factors: the density and character of the natural fractures, stress anisotropy, rock mechanical properties, injection rate, fluid type, etc. Therefore, we have to be cautious about drawing conclusions from one project to another. Nevertheless, this type of observation in a major shale play is very significant. Next year, results will be published from a similar core-across study in a much more naturally fractured formation. We will have to wait to see if there are differences.

The following equation is an approximate mass balance equation on the fluid injected. It expresses the idea that volume of fluid injected equals volume leaked off at shut-in plus volume stored in the crack at shut-in:

Vi is the total volume injected, CL is leakoff coefficient, A is fracture surface area, te is duration of injection, Sf is the fracture stiffness, Pf,si is the fluid pressure in the crack at shut-in, and Shmin is the minimum principal stress.

Let’s think about what processes affect the fracture ‘length’. If we assume a fixed fracture height, then length equals area divided by height. The mass balance equation indicates that if leakoff coefficient goes up, then length goes down. Similarly, if the net pressure (pressure minus Shmin) goes up (due to higher effective fracture toughness or higher viscous pressure drop along the fracture), length goes down. Thus, traditionally, the main controls on fracture length have been leakoff, viscous pressure drop, and toughness. These concepts have been described in papers analyzing propagation regimes.

But now it seems that we need to consider one additional variable: the number of propagating strands. In that case, we need to write fracture area as:

Where N is the number of strands and Ai is the area of each strand. Considering the mass balance equation, we can see the profound effect of having multiple strands – there is much more leakoff and fluid storage. This leads to much shorter fractures than you would otherwise predict (holding other parameters constant).

There are other implications. The multiple fracture strands will cause stress shadow on each other. The net pressure in each individual crack may be a few hundred psi (pressure minus the normal stress on the crack, including stress shadow from neighbors), but the aggregate net pressure could be a few thousand psi (pressure minus the remote minimum principal stress). This could help explain the common observation of high net pressure, which is typically handled by using effective fracture toughness much higher than measured in the lab.

So how should we model this? Numerically, solving systems of equations with many parallel fracture strands is challenging, unless many simplifying assumptions are made. I wonder if we can find a pragmatic way to modify our models so that we can model fracturing from each individual perf cluster as one ‘effective fracture’ that corresponds to an array of parallel cracks. We could then modify the fluid storage, leakoff, and stress shadow to mimic a system with multiple strands.

We might ask – why are there multiple strands? It’s a good question, because there are good reasons to not expect multiple strands. The combination of stress shadowing and fracture toughness tends to create a tendency for fracturing to localize into one or two dominant cracks, even if there are initially multiple competing cracks (for example see Figure 3-8 from my PhD thesis). But on the flip side, pressure gradient due to flow (either viscous pressure drop in the crack, inertial flow pressure drop in the crack, perforation pressure drop, or near-wellbore complexity pressure drop) tends to distribute flow across multiple fractures. Evidently, these sources of flow-driven pressure gradient are strong enough to force distributed fracturing, in spite of stress shadowing.

There are several processes that could lead to the initiation of multiple fracture strands. The cracks initiate from a large number of individual perforations in each cluster. Cracks could be induced to branch at preexisting flaws and planes of weakness. Mode III twisting creates subparallel arrays. Or perhaps there are other processes that we do not yet fully understand. Elastodynamic fracturing (propagation at rates close to the elastic wave speed) can cause crack-tip bifurcation, but I doubt that crack propagation in the subsurface ever occurs rapidly enough to enter the dynamic regime.