Multistage hydraulic fracturing in horizontal wells enables economic production from low permeability resources. A variety of parameters needs to be optimized: stage spacing, cluster spacing, well spacing, well landing depth, injection rate, injection volume per stage, proppant mass per stage, proppant type, fluid type, injection sequence, perforation design, and more. To a large extent, these parameters are optimized through trial and error. By trying different approaches on hundreds of wells (spending billions of dollars), companies iterate towards improved designs. Unfortunately, the subsurface is highly variable, and the ideal design in one context may not be the ideal design in another. So engineers are constantly trying to reoptimize and continuously improve.

The process is: (1) gather geologic data and build a ‘baseline’ model, (2) vary a few key parameters to match data from well where fracturing and production data are already available, and (3) run different scenarios (varying design parameters like cluster spacing) to optimize design for subsequent wells. No model is perfect, and the goal is not to make perfect predictions. But ResFrac can help screen ideas: identify the most promising designs, rule out designs, and inspire new ideas by improving physical intuition.

In this post, I apply ResFrac to the optimization of perforation cluster spacing. It is widely reported that companies have been using closer and closer cluster spacing. Tight cluster spacing seems to improve production even in formations where pressure interference calculations suggest that it should be unnecessary. Many unconventional plays have ‘system’ permeability on the order of 1 microdarcy and fluid viscosity of 0.1 cp or less (either gas or a light oil). This implies a hydraulic diffusivity of 1e-3 ft^2/s or more. With this hydraulic diffusivity, pressure interference should occur over distances of hundreds of feet over several years. It seems like overkill to put the clusters 25 feet apart.

To investigate, I performed four ResFrac simulations, using cluster spacing of 100 ft, 50 ft, 33.33 ft, and 25 ft. The simulations describe a single 200 ft fracturing stage. The well is drilled horizontally in a 60 ft pay zone with permeability of 1 microdarcy and dry gas at initial saturation of 60%. Surrounding the zone, the non-pay zones are water saturated and have permeability of 100 nd. Vertical permeability is 10x smaller than horizontal permeability. There is a 300 psi stress barrier below the pay zone and a 100 psi stress barrier above the pay zone.

When we perform simulations with real data, we use a more detailed model (ie, define average formation properties every 10-20 ft). But since these are generic example simulations, I am using a simplified geologic model.

Injection is performed with water and 30/50 proppant at concentrations from 0 to 3 ppg at 80 bpm. After injection, the well is shut-in for a week and then produced for five years at constant bottomhole pressure of 1400 psi. The simulations are isothermal, use the black oil model (a table of gas formation volume factor versus pressure), and include both the poroelastic stress changes due to pressure depletion and the stress shadow caused by fracture opening. The fractures are assumed to propagate straight, an assumption suitable for settings that do not have low horizontal stress anisotropy. The perforation diameter is chosen to be small enough that there is substantial rate-dependent pressure drop. After mechanical closure, the fracture conductivity is a function of effective normal stress and proppant mass per area. Unpropped sections of the fracture retain aperture and conductivity after mechanical closure, but are less conductive than the propped parts of the fracture (and the conductivity is more stress sensitive). For the technical details of ResFrac, refer to SPE 182593.

The simulated gas production in the four simulations is shown below. There is an unmistakable trend – more clusters is better. A lot better! All four simulations injected the same amount of water and proppant into the stage. There is negligible increase in cost associated with increasing the number of clusters in each stage. Yet the increase in revenue is great. For example, going from 50 ft spacing (4 clusters) to 25 ft spacing (8 clusters) increases five year production by 25,000 Mscf per stage. A well could have 50 stages. The marginal increase works out to roughly 1.25 billion cubic feet per well over five years, a difference worth millions of dollars. 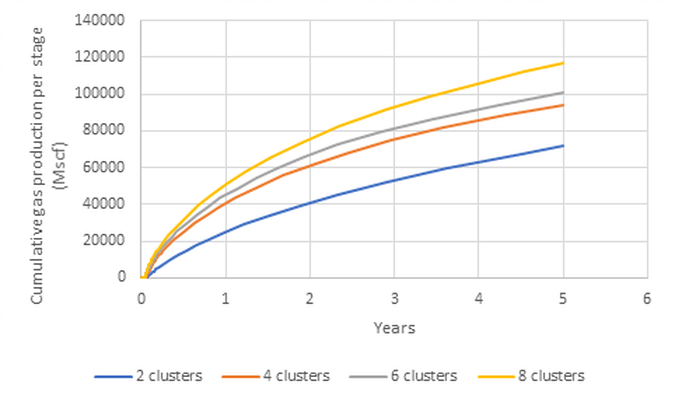 Why did decreasing stage spacing lead to greater production? Let’s take a detailed look at the simulation results. The figures below show the distribution of pressure, aperture, proppant, and gas saturation in the fractures at the end of five years. To improve visibility, the figures are stretched 15x in the direction perpendicular to the fractures.

Here is a movie of the simulation with six clusters.

The figures below show results from the simulations with two clusters and eight clusters with cross-sections through the matrix.

Here are some observations from the results:

1. The rate-dependent perforation pressure drop forces the fluid to flow into all of the perforation clusters. There is one exception – in the eight cluster simulation, the stress shadowing was so strong that a fracture was unable to propagate from one of the clusters.

2. Stress shadowing causes the fractures to develop complex shapes as they attempt to propagate in a way that minimizes stress interference from their neighbors.

3. Proppant gravitationally settles downward and forms an immobile bed at the bottom of each fracture. The high horizontal velocity of the fluid and upward flow in the fracture enables proppant to be carried hundreds of feet into the formation, even though fracturing is performed with water.

4. If a fracture preferentially propagates downward, the proppant bed at the bottom may not form a sufficiently high bank to reach the wellbore. As a result, proppant is not effectively placed in the wellbore. If a fracture preferentially propagates upward, proppant settles down onto the well and proppant placement at the well tends to be good. In fractures that propagate neutrally with respect to depth, proppant may or may not pile high enough to reach the well.

Observation #5 is the key to understanding why closer perforation spacing performs better. In these simulations, the key to maximizing production is minimizing near wellbore pressure gradient. It is critical to draw the fracture pressure down to the low pressure of the wellbore. This increases production rate and ultimate recovery (because more gas can be recovered if it is drawn down at a lower pressure). With more clusters, there are more conduits for flow into the well, reducing overall resistance to flow.

Stress shadowing causes complex fracture geometry due to stress interaction. The upward propagating fractures have especially good proppant placement at the well and correspondingly have lower pressure across much of the fracture face.

If a fracture has extremely good near wellbore conductivity and draws down to a low pressure, it causes poroelastic stress reduction that reduces the effective normal stress on the neighboring fractures. In other words, a stage with excellent drawdown can have beneficial effects on the conductivity of fractures in nearby stages. Finally, distributing flow across more fractures/clusters reduces non-Darcy pressure drop, which is flow rate dependent.

Decreasing cluster spacing reduces fracture length. However, the fractures are finite conductivity, and so pressure drawdown cannot be efficiently transport along the full length of the fracture. This reduces the value of long fractures. In practical applications, there are usually other wells nearby, perhaps 1000 ft away. These wells compete for production, further reducing the value of propagating fractures far from the wellbore.

It has sometimes been argued that creation of fracture network ‘complexity’ generates a stimulated rock volume of enhanced permeability. It has been argued that this could justify larger cluster spacing. To explore the potential implications of a stimulated rock volume in ResFrac, the simulations could have been performed with the options for dual porosity and irreversible pressure dependent permeability enhancement in the dual porosity ‘fracture’ elements. But the trend in the industry towards tighter spacing suggests that creation of a complex SRV is not the primary mechanism of stimulation in many (or most) formations. Planar fracture models with constant matrix permeability are capable of matching production in most ‘unconventional’ formations.

This example shows how ResFrac can be used to optimize fracture design. There are complex interactions between processes: height growth, stress shadowing, proppant transport, and multiphase flow. These processes are inherently three-dimensional.

The complex interactions underscore the value of describing fracturing and production in a single unified simulation. The fracturing process affects the detailed distribution of proppant, which directly impacts production through fracture conductivity, poroelastic effects, and multiphase flow.