Often, postclosure interpretations are performed with a plot of pressure versus a specialized function called “the linear flow time function,” FL. I don’t recommend using plots based on FL because comparable interpretation results can be achieved using simpler, more intuitive plots. I believe that FL plots make things unnecessarily confusing. But plots using FL are widely used, so it useful to understand them. 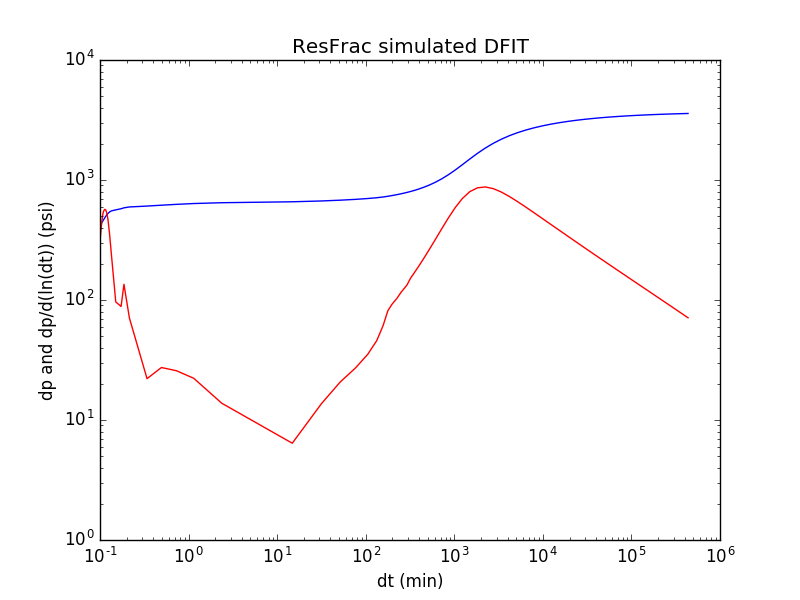 You may not see a clear linear flow trend or a radial flow trend. If you see a -1/2 slope or -1 slope but the trend does not last at least one-half of a log-cycle on the x-axis, then you cannot be confident that you have a reliable interpretation.

To calculate permeability from the linear flow period or the radial flow period, you can plot pressure versus the inverse of the square root of time or the inverse of time, measure the slope of the line, and use analytical solutions to calculate permeability from the slope. A detailed explanation is provided in the paper SPE 25425 by Gu et al. (1993). The below figure shows a plot of pressure versus one over the square root of time for the transient shown in the plot above. The linear flow period is seen in the straight line on the left of the plot (time is increasing as you move left along the x-axis). The slope of the curve can be used to infer permeability. 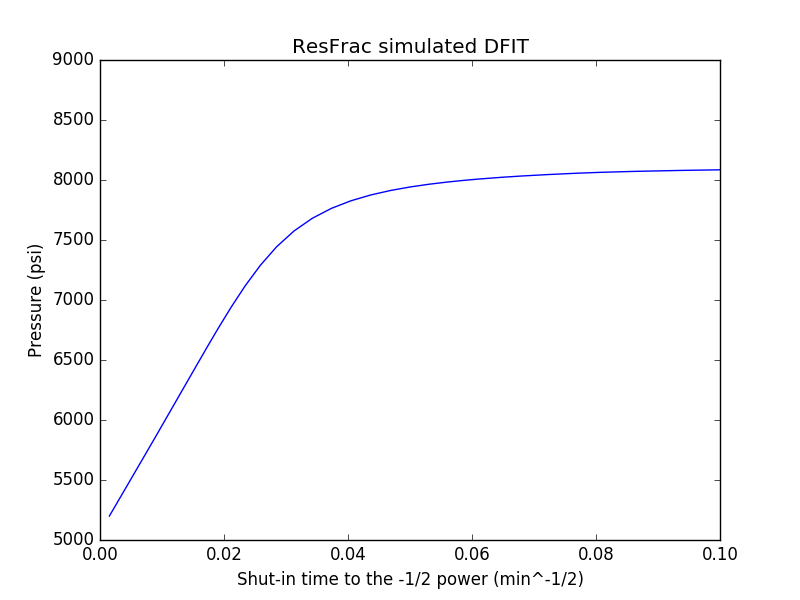 Now that I’ve (very briefly) covered the basics of postclosure interpretation, I can explain the meaning of FL plots. This is only a brief discussion. For more detail, I recommend referring to Section 9-6 from the book “Reservoir Stimulation” edited by Economides and Nolte (with Chapter 9 written by Gulrajani and Nolte). FL is defined as:

How does this relate to post closure analysis? As discussed above, if you plot pressure versus one over the square root of time, then during postclosure linear flow, you can use the slope to calculate permeability. Since FL is approximately proportional to one over the square root of time, it has the same property. Plots of pressure versus FL make a straight line during postclosure linear flow.

So why was the FL function developed? Why not just use plots of one over the square root of time? At the beginning of postclosure linear flow, pressure does not scale with one over the square root of time. The t^-1/2 scaling begins a bit later. According to certain idealized assumptions, it can be shown that FL is proportional to the pressure trend, during the entire postclosure linear period, even before the onset of t^-1/2 scaling (these assumptions are described in SPE 38676 by Nolte et al., 1997). Nolte et al. (1997) proposed to use the FL function to infer permeability using data from the postclosure linear period before the onset of t^-1/2 scaling. There are two issues with this idea. First, in DFITs, shut-in usually lasts long enough that a clean -1/2 slope is apparent, and so there is no need to attempt to infer permeability from the early postclosure linear flow period. Second, the FL function is derived by making the assumption that there is no fluid remaining in the fracture at closure. This does not seem like a good assumption to me – fracture walls are rough and so fractures continue to store fluid after the walls come into contact (for more discussion of this topic, refer to a paper I coauthored, SPE 179725). Consequently, I am doubtful that you can reliably use FL to infer permeability prior to the onset of t^-1/2 scaling (and typically this isn’t necessary, anyway).

The figure below shows the transient shown above in a 1.0/FL^2 plot. You can see the -1/2 slope that corresponds to postclosure linear flow. 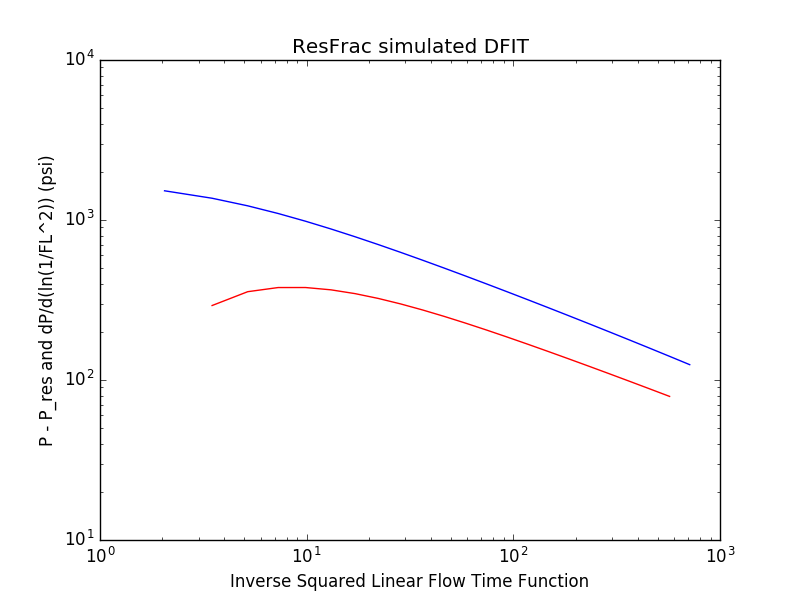 The log-log 1.0/FL^2 plot can be used to identify the onset of the postclosure linear trend. But the same can be accomplished with the simpler and more intuitive log-log derivative plot using shut-in time, as shown above.

To summarize, postclosure permeability estimation can be accomplished without using plots based on FL. Flow regimes can be diagnosed using the standard log-log derivative plot (with derivative taken with respect to shut-in time). Permeability can be inferred quantitatively with plots of pressure versus shut-in time to the -1/2 power or -1.0 power.

Diagnostic log-log derivative plots using 1.0/FL^2 or FL^2 are used to diagnose postclosure regimes in the same way as standard log-log derivative plots. Permeability can be estimated quantitatively with plots of pressure versus FL or FL^2. It has been argued that the FL function can be used to infer permeability in the period when shut-in time is greater than tc and less than 3*tc. But this is based on the questionable assumption that no fluid remains in the fracture after closure, and typically the shut-in lasts longer than 3*tc. In future research, I plan to use ResFrac to perform simulations and test if the FL function can give good permeability estimates if t < 3*tc, even if a substantial amount of fluid remains in the fracture after closure.

I recommend against using FL (linear flow time function) plots. FL plots make things more complicated, and it is questionable whether they improve interpretation. But they are widely used, and so you’ll need to understand them. I hope this post helps.