2021 has been a busy year! Work been coming in almost nonstop, and we’ve grown the team to keep up. This post reviews some of the more interesting things happening right now at ResFrac.

HFTC paper with Apache on Calibrating Models with Offset Fiber

On Tuesday, Mojtaba Shahri from Apache will be presenting a paper that he and colleagues wrote with ResFrac on calibrating fracture models using offset fiber– SPE 204172. Within ResFrac, Dave Ratcliff was the primary person involved in this project.

I am a big fan of offset fiber. It allows us to directly, unambiguously observe fractures crossing offset wells. These observations are invaluable for calibrating hydraulic fracturing models. In theory, microseismic should be able to provide estimates of fracture geometry. But in practice, I’ve seen repeatedly that microseismic fracture lengths can be inaccurate. Not always – but it happens surprisingly often. As a result, I am becoming more cautious about using microseismic for calibration. In contrast, direct observations such as offset fiber provide ‘hard data’ that we can firmly rely on. Fiber is also useful because it gives us granular information: the number of frac hits, the timing of each hit, and the approximate fracture orientation.

Sealed wellbore pressure monitoring (SWPM) is another, lower cost, technique that provides high-confidence, direct identification of frac hits, which can be used for calibration.

Hydraulic fracture size and shape are largely determined by:

To calibrate a model, we need to constrain these inputs.

Combining fiber optic and SWPM with a variety of other data, we can develop a strong understanding of what is happening and where. This allows us to confidently calibrate our frac model, and ultimately, to optimize design and maximize free cash flow.

In SPE 204172, one of the key findings is that the fracture geometries are predominantly planar. Offset frac hits occur in corridors with roughly the same width as the stage in the injection well. The corridors align consistently in the direction of SHmax. The number of discrete frac hits is less than or equal to the number of clusters in the injecting well.

From the strain signature, we can infer fracture orientation and mode of deformation. The strain signatures look remarkably similar to the mathematical solution for stresses/strains ahead of a propagating opening-mode crack (Sneddon, 1946; Inglis, 1913). There are two lobes of tensile strain out ahead of the tip, on either side.

Below is a ResFrac simulation of the strain rate response measured in a fiber well during a frac hit. Red shows tension and blue shows compression. The frac arrives at the well at roughly 1.2 hours, and the well is shut-in at 2.96 hours. Real data looks remarkably similar to this synthetic data generated from classical fracture/continuum mechanics! Refer to SPE 204172 for more details. 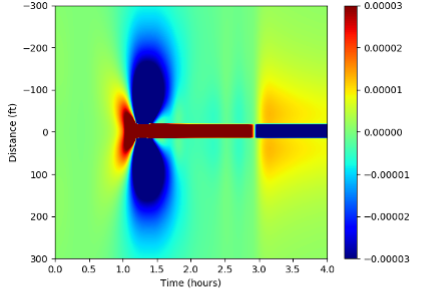 The observations from SPE 204172 are not unique. In recent years, direct in-situ observations have shown straight, planar fractures, in every shale play where results have been reported (https://www.resfrac.com/blog/case-planar-fracture-models; https://www.resfrac.com/blog/recorded-arma-robe-talk-case-planar-fracture-modeling).

Earlier in the shale revolution, it was widely believed that fracturing created zig-zagging fracture networks (Fisher et al., 2002; Weng et al., 2011; McClure et al., 2016). But in the past 5-7 years, direct observations from core-through, fiber, and offset image logs have shown that this conceptual model is not representative of the true fracturing process in shale, at least, not in the great majority of modern shale plays.

Direct in-situ observations suggest that the industry has tended to overinterpret – and under validate – data from remote imaging such as microseismic. Fractures do have complexity at small-scale. But when you zoom out, they look awfully darn planar. We handle the large-scale effects of small-scale complexity with constitutive relations for processes like proppant trapping and toughness scaling.

There is no doubt that hydraulic fractures sometimes divert into large, seismic-scale faults. But this is not the same thing as the ‘complex fracture network’ concept.

This is why, with ResFrac, we primarily focus on planar fracture modeling!

We kicked off our Parent/Child Industry Study in March. We have ten datasets, and as we’ve dug in, we have been blown away by the quality. The participating companies are providing fiber optic, tracer, frac hits, geochemistry, interference tests, and downhole imaging, among others. There are two datasets with pressure observation wells (either vertical or lateral) that allow us to measure pressure depleting at the far-field during production and to observe the pressure response during frac hits. The datasets provide extraordinary information about what is happening in the reservoir, which enables us to confidently calibrate the models. Once the models are calibrated, they will be applied towards evaluating various strategies to mitigate parent/child impacts and maximize free cash flow.

We began a modeling project for the HFTS2 project. HFTS2 was organized by a consortium of operators, the Department of Energy, and GTI. It involves a parent/child dataset in the Delaware Basin with two parent wells and an adjacent pad of more recent wells. We are being funded by the project to perform an integrated modeling study that will be shared with all the participating companies. It is an exceptional dataset, including a core-through slant well and multiple pressure observation wells.

We are very excited to be supporting this innovative and exciting project. Other recent core-through studies – HFTS1 and the COP Eagle Ford project – have been very influential to the industry. I expect HFTS2 to have a similar impact.

The first batch of papers from HFTS2 will be presented at URTeC this year. Our work will still be ongoing at that point. Hopefully, we’ll be given permission to present it publicly next year. Rohan Irvin is the ResFrac person leading the modeling project.

Geothermal energy is heating up! Fervo Energy’s recent $28M funding round is the latest indication of growing interest in geothermal energy. A window of opportunity has opened for the geothermal sector.

Multistage hydraulic stimulation – which transformed the oil and gas industry – may do the same for geothermal. Serious capital is being brought to bear, and there is a huge opportunity for breakthrough performance. Geothermal provides baseload, emission-free power generation, with minimal surface footprint.

As I’ve written about previously, I am bearish on the prospects for ‘deep closed-loop’ geothermal concepts. However, I remain optimistic about the geothermal sector overall, because these ‘deep closed-loop’ projects represent only a fraction of the total capital being deployed in this space.

ResFrac is the only coupled ‘true’ hydraulic fracturing, reservoir, and wellbore simulator on the market, and so it’s ideal for simulating next-generation geothermal systems.

We’ve recently had requests to simulate supercritical systems where temperature exceeds the critical temperature of water – 374’ C. Previously, our correlations for water properties were not valid at such high temperatures. So, last month, I implemented new correlations to enable ResFrac to accurately calculate water properties at ultrahigh temperatures. I also implemented the ability to handle the water/steam phase transition, and smoothly handle fluid properties near the critical point. The density and enthalpy of the fluid is calculated rigorously as a function of temperature and pressure with the official correlations from the International Association for the Properties of Water and Steam (http://www.iapws.org/).

Water has an unusually large heat of vaporization. This leads to an interesting and surprising phenomenon. For example, if the production wellhead pressure is below the saturation pressure, the heated water will flash to steam as it flows up the well. Counterintuitively, conservation of energy causes the temperature to drop significantly as the steam forms. The heat of vaporization (required to flash the water to steam) is supplied by transferring energy from the thermal energy of the liquid phase. Even though temperature drops, the enthalpy content of the system remains constant (except for a minor amount of heat loss from conduction to the surrounding formation). The changing mixture temperature and density dynamically affect the hydrostatic head, change the bottom hole pressure, and impact the flow rate through the fractures in the reservoir. This is exactly the kind of complex, coupled process that ResFrac was built to handle.

We have a new paper (SPE 205297) coming out at the SPE International Hydraulic Fracturing Conference (IHFTC) in Oman. The conference was originally scheduled for June, but it is now occurring in December. In the paper, we statistically summarize the results from 62 DFITs that we interpreted for ten different operators in nine different shale plays. We greatly appreciate the support of the operators that gave permission to have their data included in the review.

The results are consistent with our prior findings: (a) a ‘compliance method’ closure response is apparent in the great majority of DFITs, (b) ‘false radial’ signatures are widespread in gas shales, and not in oil shales, (c) rapid early-time pressure drop is much greater in horizontal wells than in vertical wells, confirming the ‘near-wellbore tortuosity’ interpretation (and undermining the commonly-used ‘pressure dependent leakoff’ and ‘tip-extension’ interpretations), (d) the ‘compliance method’ and the ‘tangent method’ yield systematically different results, with greater difference in formations with relatively lower pore pressure, and (e) preclosure linear permeability estimates yield roughly similar results as postclosure linear, which means that we can extract permeability estimates from short-duration DFITs.

Also, following up on the content in one of our recent blog posts, we compared the ‘holistic method’ equation for permeability estimation to the results from other methods, and found that it overestimates permeability by 10-1000x or more. Inaccuracy of this magnitude can lead to severely suboptimal decisions for well spacing and fracture design (Fowler et al., 2019).

Please keep an eye out for that paper in December.

Automated history matching is coming soon! This is the most important remaining item on the company’s development roadmap. We have started testing it internally and expect a release by the end of the summer.

The automated history matching tool is built on the user-interface improvements that were rolled out recently with the automated sensitivity analysis tools. Within the UI, you can easily select parameters, add parameters to groups, and select options for the history matching algorithm. As always, the simulations run on the cloud, and results automatically download. The user interface allows you to monitor status as the algorithm progresses. This all makes it incredibly fast and easy to set up a sophisticated history matching workflow from your laptop.

Once automated history matching is released, automated optimization of frac design will follow soon after.

If you would like more information about any of these topics, please feel free to reach out!

Inglis, C. E. 1913. Stress in a Plate due to the Presence of Cracks and Sharp Corners. Transactions of the Institution of Naval Architectures 95, 219-230.