However, while inaccurate stress and net pressure estimates from the tangent method have received the most attention in recent years, inaccurate permeability estimates from DFITs may have a greater practical importance.

With a Utica case study, Fowler et al. (2019) demonstrated how inaccuracies in permeability and productive length lead to inefficient practical decision-making. In the study, well production was history matched with both a ‘low perm/long fracture’ model and a ‘high perm/short fracture’ model. The two models yielded reasonably similar production trends, even out to 30 years. However, if the models were applied to an economic optimization of well-spacing, the incorrect ‘high perm/short fracture’ model led to a result with excessively tight well-spacing, and large loss of economic value, relative to the true economic optimum.

There are at least two commonly-applied procedures that cause large inaccuracies in DFIT permeability estimates.

The first inaccurate procedure is to use the so-called ‘holistic equation’ for estimating permeability from a DFIT based on the ‘time to closure,’ as proposed by Barree et al. (2009). From a theoretical perspective, the equation is not valid, and from an empirical perspective, no justification for the method has ever been provided. In a systematic review, McClure et al. (2022) found that the method yields overestimates of permeability of 10-1000x. Nevertheless, as demonstrated in a recent paper by Buijs (2021), the procedure is still sometimes used in industry.

The second inaccurate procedure is to apply radial-flow permeability estimates to periods of the transient that are not actually radial flow (Zanganeh et al. 2018; McClure et al. 2019; 2022). The concept of the radial flow permeability estimate is well-established and accepted (Gu et al. 1993; Nolte et al. 1997; Soliman et al. 2005). However, a key principle of pressure transient analysis is that interpretation requires correct diagnosis of flow regimes (Horne 1995). Flow regimes are identified from straight-line slopes on specialized diagnostic plots. However, the mere presence of a straight line with a particular slope on a plot is not sufficient for identification of a flow regime. Flow regimes must occur in the correct sequences, and at the correct time. Otherwise, interpretations can be physically unrealistic, and yield inaccurate results.

The figure below shows the region of drainage for linear and radial flow around a hydraulic fracture. For genuine radial flow to occur, the radius of investigation (shown with the dashed line) must be significantly larger than the hydraulic fracture, such that it appears as a ‘point source’ relative to the size of the radial region of pressure interference (as shown on the right side of the figure). In low or medium permeability formations (less than 1 md), hydraulic fractures from DFITs are quite long – 50-100+ ft in length/diameter – and it takes a very long time for the radius of investigation to reach sufficiently far-out (weeks or months), relative to the length of the fracture. As discussed in standard textbooks (Horne 1995; Kamal 2009; Lee et al. 2013), radial flow begins at (ballpark) 100x after the start of linear flow. Thus, we should diagnose radial flow only after an extended, clearly apparent linear flow period. 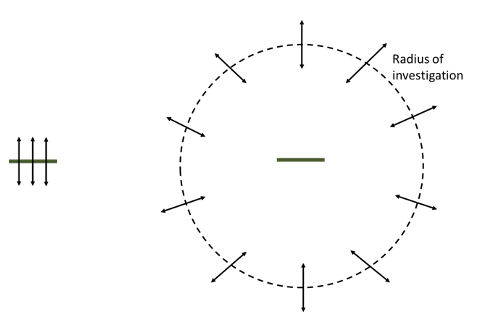 For example, the plot below shows a DFIT from the Utica. The semilog derivative (the red curve) is taken with respect to the actual shut-in time (not the superposition time), and so a -1 slope (green line segment) after the peak in the semilog derivative yields an apparent radial flow signature. This is a ‘false radial’ flow signature. It occurs too early in the transient and is not preceded by a linear flow period. 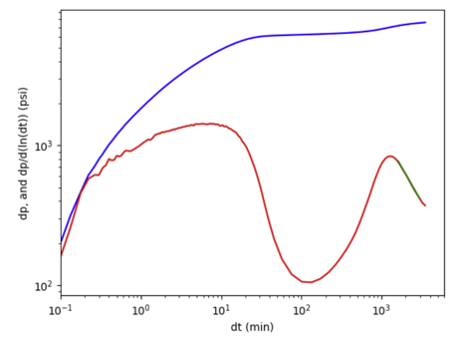 The plot below shows a DFIT from the Montney. After the peak in the semilog derivative, there is a -1 slope (green line segment) followed by a -1/2 slope (black line segment). The -1 slope is a false radial signature, and it occurs before genuine linear flow. As shown from the schematic above, it is not geometrically reasonable to interpret linear flow after radial flow. 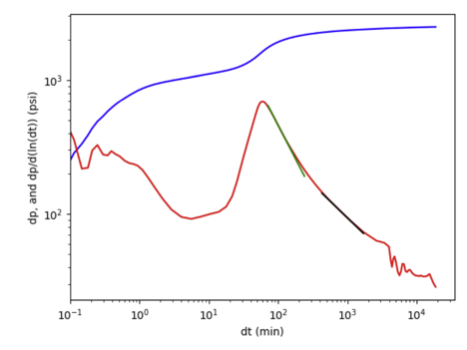 Numerical simulations suggest that usually false radial signatures should eventually bend into linear signatures (McClure et al. 2019). They are a ‘transitional’ period of the transient as the semilog derivative shifts from the peak (which is caused by the interplay of fracture compliance changes with closure and the onset of late-time impulse flow), to a stable ‘after closure’ response. The transitional period occurs because of the contrast in viscosity between the reservoir fluid and the injection fluid that is leaking off. This finding from numerical simulations is consistent with empirical data, which shows that false radial signatures are much more common in gas reservoir DFITs than in oil reservoir DFITs, as would be expected if reservoir and injection fluid viscosity contrast drives false radial signatures (McClure et al. 2022).

In most practical DFIT cases in shale, pressure recording ends before the onset of linear flow after false radial. Thus, the transient ‘ends’ with an apparent ‘radial flow’ signature, and the interpreter is tempted to incorrectly diagnose the trend as genuine radial flow.

Liu et al. (2022) discuss an even more extreme ‘false radial’ signature, in which practitioners sometimes identify radial flow as occurring before closure. As they discuss, the slope on the diagnostic plot appears superficially to resemble radial flow, but this is coincidental, and it is not a physically plausible interpretation.

A paper this month at ATCE (Virues et al. 2022) is an example of a study using ‘false radial’ interpretations. The authors perform an analysis of 83 DFITs from the Duvernay formation in Canada and conclude that “radial flow was achieved in 59% of the DFITs.” For comparison, I asked my colleague Behnam Zanganeh, who has interpreted a large number of Duvernay DFITs, about his experience. He told me that of all the Duvernay DFITs he has interpreted, he has seen only one genuine radial flow signature in any Duvernay DFIT. His experience is similar to my own. In a recent paper, I summarized results from 62 DFIT interpretations from nine different shale plays (McClure et al. 2022). Of these, a genuine radial flow signature was observed in three of them.

Figure 19 from Virues et al. (2022) shows a ‘Soliman-Craig’ plot for after-closure analysis. As stated by Virues et al. (2022), “the semilog derivative (calculated with respect to shut-in time) exhibits a slope of 0 shortly after closure, suggesting the radial flow has developed.” As a side note, the quotation contains an error – the derivative in their Figure 19 is actually taken with respect to superposition time – not shut-in time – as can be seen from the shape of the curve, and from the definition of how ‘Soliman-Craig’ plots are constructed. But regardless, the quotation summarizes the problem with the interpretation – that radial flow develops ‘shortly after closure.’ This is not physically plausible and is a hallmark of a ‘false radial’ interpretation.

Because of SPE copyright, I cannot reproduce the figure from Virues et al. (2022). You can refer to Figure 19 in the original paper, if interested. Please note that they are taking the derivative with respect to superposition time, and so the ‘radial’ signature is apparent from a 0 slope, not a -1 slope. An after closure linear period would be apparent from a 1/2 slope (instead of a -1/2 slope).

As a counter-example, the plot below shows an example of genuine radial flow. This DFIT was performed in the Three Forks formation of the Bakken system. After the peak in the semilog derivative, the plot bends into a -1/2 slope (black line segment), representing linear flow. Then, after about 1.5 log cycles (ie, 30x more shut-in time than the start of linear flow), the derivative bends down into a -1 slope (green line segment), representing genuine radial flow. This is a transient where radial flow occurs at the right time, and in the right sequence. This was a test in a relatively high permeability formation (for a shale), using an unusually low injection volume (7 bbl), and with an unusually long shut-in (25 days). All of these factors increase the likelihood of seeing a genuine radial flow signature. 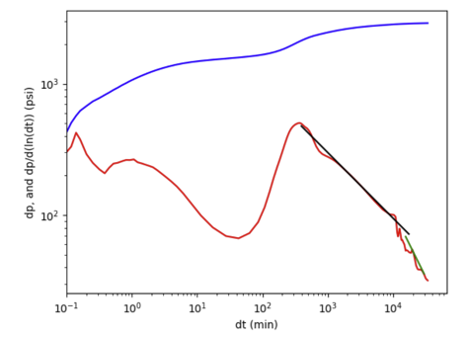 In the Utica case, the false radial permeability estimate was 71x higher than the permeability estimate from the ‘pre-closure’ interpretation, which was consistent with the permeability inferred from pressure history matching and measurements of effective producing half-length. In the Montney case, the false radial estimate was 109x higher. In the Three Forks case – with genuine radial flow – the pre-closure and genuine radial estimates were 5x different. The difference in the Three Forks case was likely caused by inaccuracy in estimates of either pay thickness or fracture geometry. In the Utica and Montney cases, the (much larger) differences were a consequence of the false radial misdiagnosis.

Table 4 from Virues et al. (2022) lists the permeability estimates that they reached with their radial interpretations. I haven’t interpreted these DFITs personally, but I can observe that they are 10-1000x higher than the values I typically see from DFIT interpretations in shale plays, and the permeability values required to achieve matches to field datasets with detailed diagnostics. The evidently overestimated permeability values are consistent with expectation – false radial is known to cause overestimates. A review from McClure et al. (2022) found that they are typically 10-100x too high.

Virues et al. (2022) argues that the consistency of their interpretation should be taken as evidence that they are accurate. They find that the Nolte et al. (1997) and Soliman et al. (2005) procedures yield similar answers. This is not surprising, because the methods are mathematically very similar. In a previous blog post, I discussed how the ‘FR1’ function from Nolte et al. (1997) is analogous to one divided by shut-in time for the great majority of practical situations involving ‘after closure radial’ – especially in low permeability formations.

Virues et al. (2022) also discussed the previously published finding that radial flow is much more common in gas DFITs than oil DFITs. This was predicted theoretically from modeling, and then observed empirically from data (McClure et al. 2019; 2022). Virues et al. (2022) argued that their findings disagreed with this result, because they observed ‘radial’ (or, more accurately, false radial) in a majority of both their ‘oil’ and ‘gas’ DFITs. While this may be literally true, it is a misunderstanding of the findings from McClure et al. (2019; 2022).

As a side note, if you are thinking of writing a DFIT paper discussing my publications, please reach out to me so that we can discuss in advance! As discussed in a blog post earlier this year, another DFIT recent paper (Buijs 2021) performed a ‘comparison’ with the McClure et al. (2019) procedure for estimating permeability, but didn’t actually apply the procedure from the paper! Recent papers defending mistaken DFIT interpretations have consistently exhibited miscommunications and misunderstandings. Indeed, one reason that this blog is useful is that the SPE lacks an effective mechanism to alert readers of inaccuracies and/or errors in the papers that are posted on OnePetro.

To recap, genuine radial flow is rare in shale DFITs. If it does occur, it is typically observed in tests with very low injection volume (less than 10-20 bbl), unusually long shut-in (longer than one week), and relatively high permeability (greater than one microdarcy). Genuine radial flow should only be diagnosed if it occurs after an extended (at least one log cycle) period of after-closure linear flow. If ‘false radial’ flow is misdiagnosed and used to estimate permeability, it leads to a large overestimate (10-100x).

To a lesser extent, false radial can also lead to inaccuracy in the pore pressure estimate. Refer to McClure et al. (2022) for strategies for estimating pore pressure from ‘false radial’ DFITs. The best way to minimize pore pressure errors is to use a relatively small injection volume (10-20 bbl) and use at least one week of shut-in. Smaller injection volume accelerates the progression of the DFIT, allowing pressure to fall-off towards reservoir pressure sooner. Even if the pressure extrapolation is uncertain, if the transient progresses sufficiently rapidly to be near the actual pore pressure, then the potential for error caused by extrapolation becomes relatively small.

< Previous
Back to blog