How to plot a DFIT

Why don’t we just make a Cartesian plot of pressure versus time? There are two primary reasons: (1) behaviors of interest occur at different timescales, making it impossible to observe everything on a single Cartesian plot and (2) some interpretations require observing subtle deflections in the pressure trend that are difficult to see without special plotting techniques.

Below is a figure showing a Cartesian plot of pressure versus time for a DFIT with a 10,000 hour shut-in period. Even the most skilled practitioner would have difficulty inferring much useful information from this plot. 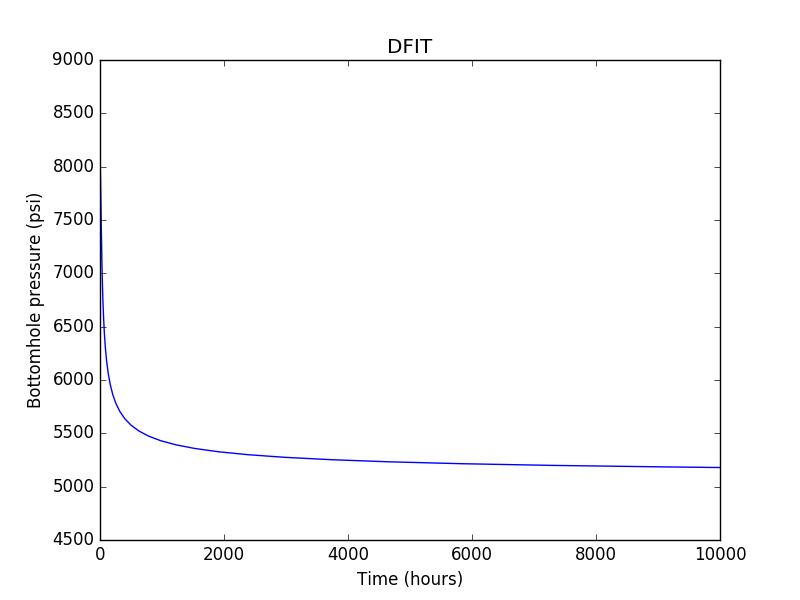 In pressure transient analysis (generally, not just in analysis of DFITs), it is common to make a “log-log” plot of pressure change versus shut-in time. In a log-log plot, the x-axis and y-axis have a logarithmic scale. This allows changes over multiple pressure and time scales to be observed in a single plot. On the same figure, it is common to also plot the derivative of pressure with respect to the logarithm of shut-in time. This so called “derivative curve“ is useful because it has the convenient mathematical property that if pressure change scales with time to a power (ie, pressure = time^alpha), then the slope of the curve on a log-log plot will be that power (alpha). If pressure scale with the logarithm of time, then the logarithmic derivative curve is flat. These plots allow practitioners to easily diagnose processes occurring at different times during the transient. The slope of the derivative curve has specific meaning and physical interpretation. 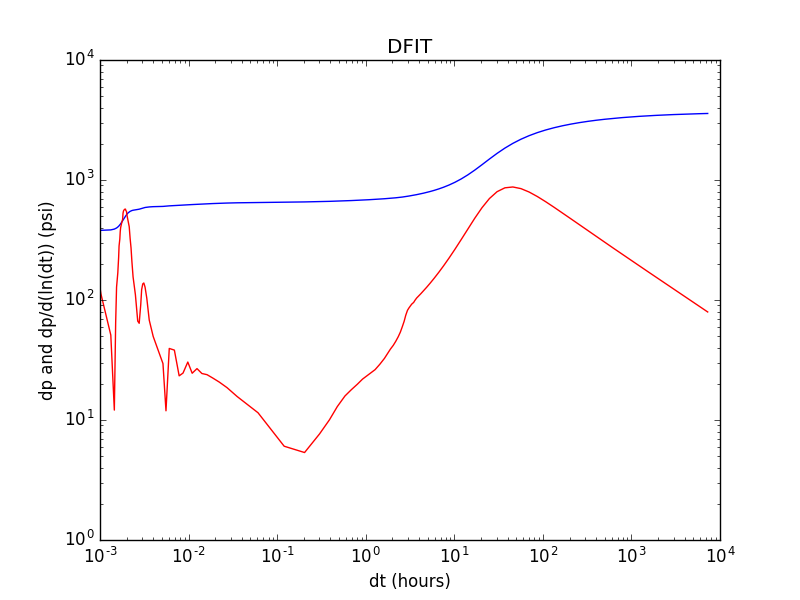 On this plot, an experienced interpreter could identify several distinctive processes. For example, after about 30 hours, the derivative curve has as slope of -1/2, indicating impulse linear flow. The term “impulse linear“ has a specific physical interpretation, and the data during this period can be used to infer formation properties. For the first 0.01 hours, water hammer occurs (pressure oscillations in the well caused by abrupt shut-in).

Often, the derivative is taken with respect to a specialized function called “superposition time” or “Horner time”. This technique was originally developed for conventional (non-fracturing) pressure transient tests as a way of adjusting for injection rate changes prior to the start of the transient. This technique, which relies on the application of a mathematical principle called “superposition,” behaves differently when applied to fracturing tests (specifically, because the propagation of the fracture during injection violates the assumptions justifying the superposition of constant rate transient solutions). In my opinion, for DFITs, taking the derivative with respect to superposition time makes the interpretation more complicated, less intuitive, and does not add diagnostic value. On the other hand, I do believe it is a useful technique for interpreting conventional well tests (tests in which a fracture is not formed). Taking the derivative with respect to superposition time causes the derivative plot to curve upward when shut-in duration is equal to injection duration. When applied to a DFIT, this upward curve is a “spurious” deflection in the sense that it is an artifact of the method taking the derivative and does not represent an actual reservoir process. I recently wrote a paper for SPE Reservoir Engineering & Evaluation on this topic of superposition time derivative plots. The paper can be downloaded here: https://www.onepetro.org/journal-paper/SPE-186098-PA.

When you look at a log-log plot of a DFIT transient, the first thing you should do is determine whether derivative was taken with respect to shut-in time or superposition time. This is a frequent source of confusion. It is possible to interpret DFITs from plots with derivative taken with respect to superposition time, but it is tricky and requires understanding nuances that are often missed by practitioners. I recommend taking derivative with respect to actual shut-in time. This avoids the spurious deflection and preserves the useful property that the slope of the line corresponds to the scaling of the pressure trend with time. 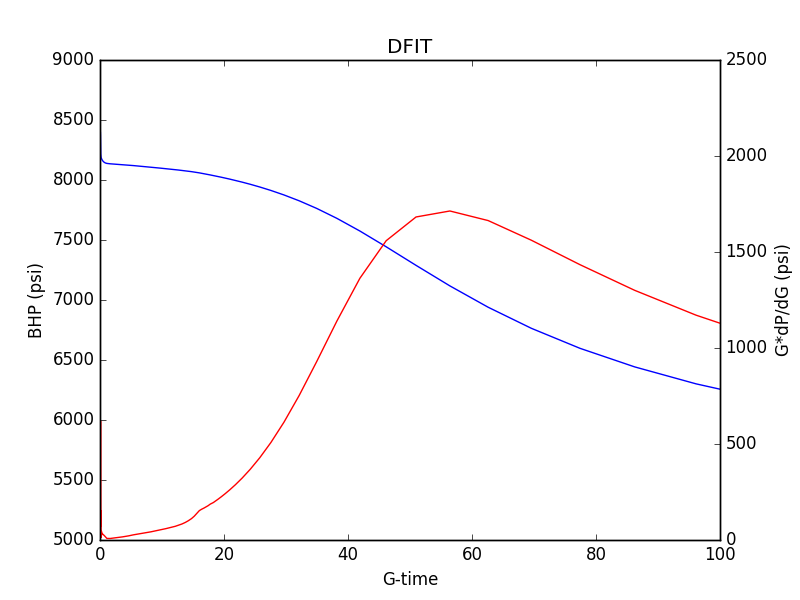 According to the ideal Nolte derivations, the plot of pressure versus G-time should form a straight line prior to closure. The G*dP/dG plot should also form a straight line. Unfortunately, pressure and G*dP/dG are very often curving. In shale, G*dP/dG is usually curving upward, as shown in the figure. The interpretation of these curving plots has inspired controversy, a topic that will be addressed in a later post.